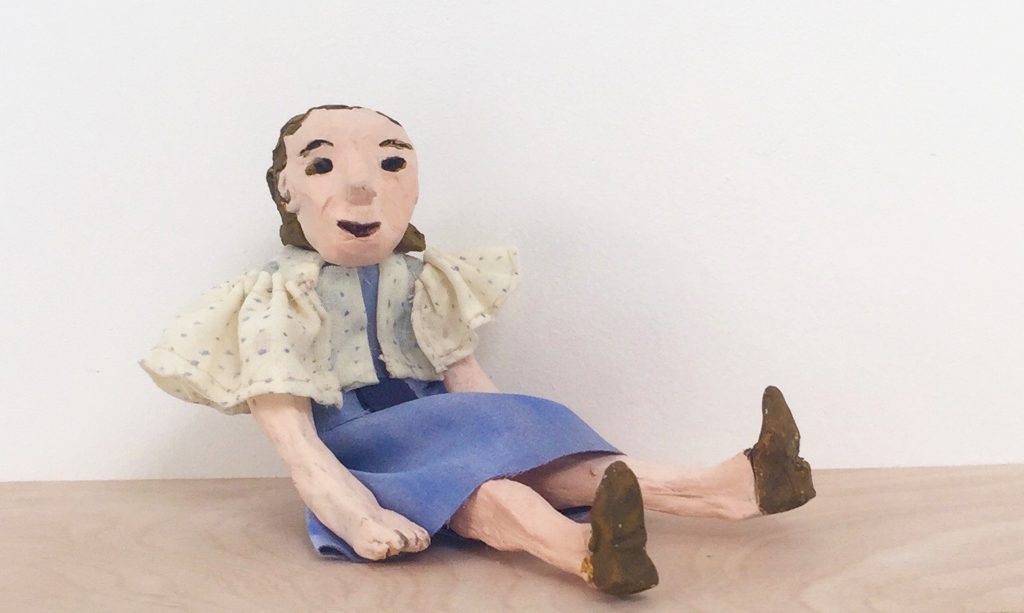 Study for a dollshouse #9, 2018
Clay, cloth and acrylic paint, (dimensions variable)
From Noon in the Desert

Noon in the Desert is taken from the opening line of William E Stafford’s poem, ‘At the Bomb Testing Site’, and is a series which explores the replica neighbourhoods, constructed at the nuclear weapons test sites in Nevada during the 1950s, in order to measure the effects of nuclear detonation.  As a project, it emerged in response to a tourist postcard I came across of the Las Vegas casino, The Pioneer Club, in which a mushroom cloud can be seen looming over the Nevada desert in the distance. The two localities, known as ‘Doom Town’ and ‘Survival Town’, were designed to reflect a generic image of American post-war suburbia and were populated by a series of costumed mannequins, strategically placed in mock-up homes.

Following in the tradition of Frances Glessner Lee’s The Nutshell Studies of Unexplained Death, I became interested in how the forensic use of the miniature subverts the innocence of the doll’s house aesthetic, in order to recreate complex histories. Taking found archival photographs of the two test site towns as my source, Noon in the Desert became a re-creation of their interior and exterior spaces, reworked in miniature form.

Modelled in clay on a diminutive scale, the handmade figures reflect the mannequin poses they are taken from. Presented as a series of isolated specimens, their faux-naif aesthetic mirrors the tableau of buildings and interiors that have been recreated as separate studies using wood, cork and felt.